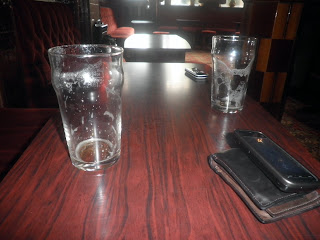 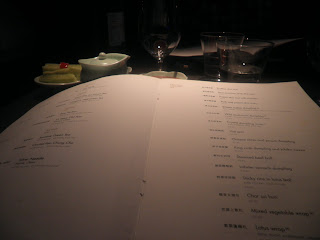 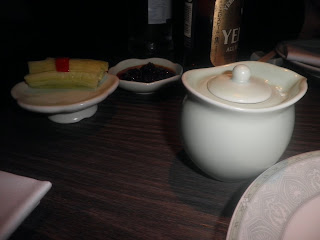 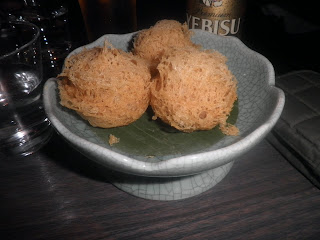 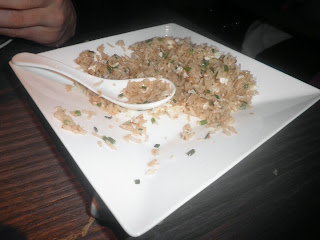 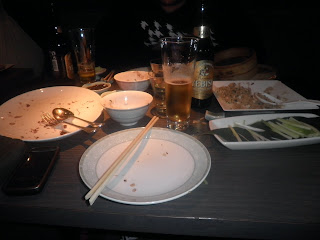 Me and Nacho are a lazy pair of sods, after a pre-fish and chip beer in Soho, we wandered across the road and began reading the menu for Yaucha, 1 of 3 Michelin starred Chinese restaurants in London ,Hakkassan and Kai being the other two. The menu looked great and Nacho not eaten in a 'so called' good restaurant in London yet, so we decided to go inside, they were almost full as it was Friday lunch time and there was a good buz about the restaurant, but we managed to get a table for 2, we went for Dim-Sum, we had about 8 small dishes, mainly steamed dumplings of different types, chicken and prawn, mushroom, chicken and mushroom, etc, and some fried chicken balls, which tasted like they had been fried in old oil! A fried rice was very medioca, with salted fish, eggs and spring onions, it was a bit to oily and didn't have that slight charred flavour that a fried rice should, it was more of a steamed oily rice! Peking duck was nowhere near as good as I have had in other restaurants in London for a fraction of the price, it again had been deep fried in dirty oil, and was a bit to dry, served with steamed pancakes, cucumber and spring onion and a toy town sized portion of Hoi Sin sauce, which didn't help as the duck was dry anyway. We had 2 beers each and a bottle of still water, no dessert and the bill was £100! Next time we wont be so lazy, and we will walk the 5 minutes it takes to walk to China town.....Or go for fish and chips as planned!
Posted by Chris Golding at 00:07