What is Soy Sauce? 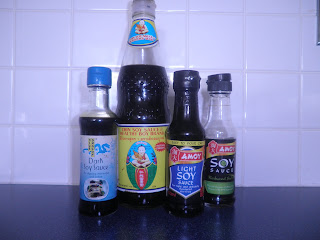 Soy sace is another of those ingredients we all use from time to time (in my case all the time) but most of us, including me, don't really know that much about it! So I done a bit of research and here is what I found.

Soy sauce, or 'Shoyu' as it is called in Japanese, is an indespensible condiment to every kitchen in Japan. No savoury dish is complete without the addition of Soy sauce in one form or another, and there are a number of different varieties to suit each purpose. Regardless of the variety, the production process is similar. Cracked wheat and steamed soybeans are impregnated with a type of mould, known as 'asperillus oryzae' and left to ferment in wooden kegs for several months. This process breaks down the proteins in both ingredients into amino acids, releasing a wealth of umami-rich glutamate.
As well as being used on its own for dipping and seasoning, soy sauce is also mixed with other umami-providing ingredients to excellent effect. With Dashi and Mirin it creates tsuyu, a versatile sauce which is used for dipping tempura as well as for flavouring Udon, Soba and Somen noodles. It can also be boiled with sugar and mirin to create a 'tare', a dark, sweet and sticky sauce used to baste many types of meat and fish, and with mirin, sake and sugar to create the famous teriyaki sauce.

Method:
Mix all of the above ingredients in a pan and simmer untill the sugar has disolved. Easy. Allow to cool or use immediatly, teriyaki sauce can be stored in the fridge for up to a week.

Method:
Pierce the skin of the boned chicken legs with a folk, this allows the sauce to get into the meat and also prevents the skin from shrinking during cooking.
Heat a large pan and brown the boned chicken legs, skin side down, then turn and continue cooking for a further 10 minutes.
Remove the chicken from the pan and temporarily set aside. Add the teriyaki sauce into the same pan that you cooked the chicken legs as the juices left behind will add flavour. Bring the sauce to the boil, after a minute or so it will begin to thicken slightly, add the chicken legs to the now slightly thick sauce and continue cooking, turning the legs several times, for a further 5 minutes.
Remove the teriyaki chicken legs from the pan, slice into about 12 slices each leg, present on a plate sprinkled with the sansho pepper, serve with steamed rice and pickled cucumber.
Posted by Chris Golding at 11:40