Plenty More Cod in the Sea. 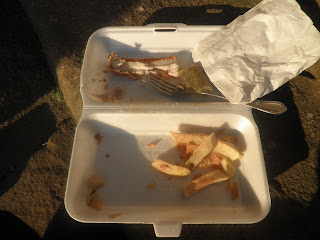 Below is an interesting article which I have simply copied from a London newspaper.


Cod and Chips could become a more regular sight on our dinner table following reports of rising stocks of the fish. Numbers in the Barents Sea, off Norway, are at their highest for 60 years, say the Institute of Marine Research in Norway. There could even be too many, leading to the risk of cannibalism as their food source dwindles, claim some Norwegian fishermen. Many tonnes of the fish taken from the Barents Sea end up in Britain, although few British fishermen operate there. The turnaround following years of decline came after the Norwegian and Russian Governments last week agreed a 16% increase in the area's cod quota next year, from 607 000 tonnes to 703 000 tonnes. However, stocks of Cod in the North Sea remain in a 'precarious state', warned Bernie Armstrong, chief executive of the Scottish Fisherman's Federation. The North Sea Cod quota is just 28 000 tonnes each year.


I guess that what the above article is saying is that we should be buying our cod from Norwegian and Russian Fishermen. And as we are in the state that we are in with the extremely low Cod population around our shores, I don't think that this is such a bad idea. There simply isn't enough fish around our coast to feed our population and the sooner we realise this the better. In fact NOT buying British will actually benefit us in the long run, and help to sustain our ever declining fish stocks.
With the world getting smaller, and it becoming increasingly easier to import produce from around the Globe, I think that there is no problem with importing from sustainable sources where ever in the World this may be.
I also believe that 'fresh is best', but there is a place on the market for frozen fish, for example, if you are going to deep fry fish, I don't think that it is essential that is hasn't previously been frozen, I guarantee that every tempura prawn sold in London tonight will have at some point been frozen, as the type used in every Japanese restaurant that I know, are from Israel or India, and are therefore obviously frozen in order to stay fresh on the trip to the UK.
Posted by Chris Golding at 11:07