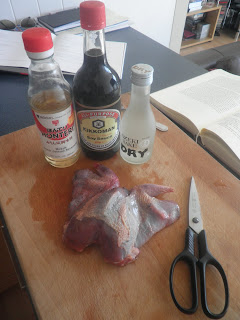 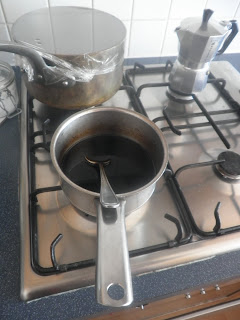 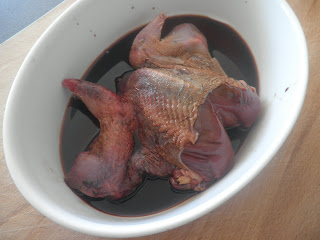 A week or so ago I cooked me and a mate, grouse Yakitori, they come into season on the 12th of August, but don't come down in price until 2 weeks after that, I enquired about buying one on the 14th, from a butcher in Battersea, but put the idea on hold when I found out that they were selling for £20! Each!
Usually you eat Grouse with cabbage, game chips, bread sauce, etc, but I felt like doing something Japanese with it for a change.

Method,
First make the Yakitori sauce by heating the Sake in a pan, then carefully burn of the alcohol (in the same way you would a Christmas pud), then when there are no more flames and the alcohol has all burned off, add the Mirin, soy and sugar, bring to the boil, dissolve the sugar and simmer for 10 minutes.
Remove the Yakitori sauce from the heat and cool in the fridge, or over ice.
Toss and turn the Grouse in the sauce and leave to marinade for 5 or 6 minutes.
Ideally the Grouse should be cooked over charcoal, but a griddle is sufficient, I used Bincho coals, from Japan and a Robata grill which I borrowed from Zuma, you can just use a normal Barbecue or like I say, just a griddle pan.
Cook the bird for 5 or 6 minutes, each side, turning frequently and brushing with the Yakitori sauce every minute or so, Grouse should be eaten pink, not well done or to rare! And rested for half the time it has been cooked, as with all meat.
I served mine with simple steamed rice and some Japanese pickles!
Posted by Chris Golding at 20:14