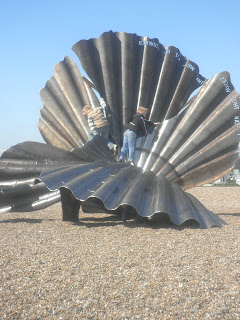 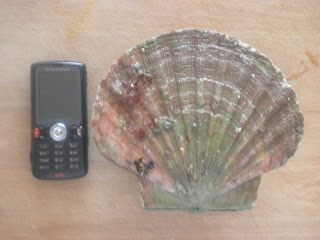 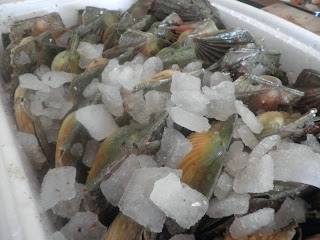 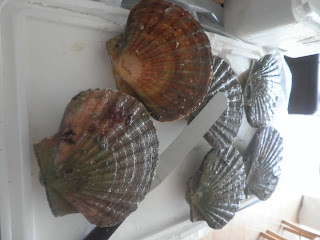 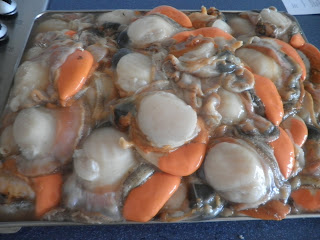 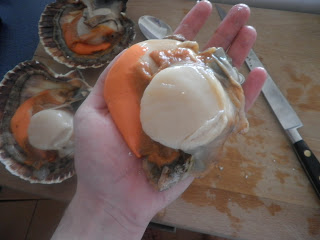 Scallops are one of my favourite things to eat in the whole world! The are a delicate, sweet, soft muscle, they taste amazing, cooked or raw, they are a bit pricey, but then you have to pay for quality. For me they are the beef fillet of the shellfish world, no fat, just really soft meat, or in a Scallops case, muscle. Yet, in Britain we don't really eat much of them, fair enough it may be a bit tricky getting hold of them, never, ever, ever,ever buy them from a supermarket, they are shit, and if you have never tried them before you will be wondering what the fuss is about, you may have to venture out to your local fishmongers. Another reason for Brits not really eating allot of Scallops is that shellfish can, I suppose, look a bit intimidating, a little bit difficult to get into or prepare, which works in its favour, as most shellfish, in fact all bare Lobsters, are still sustainable sources of fish, which experts say we should be eating more of so as to take the pressure off of other fish stocks, such as Plaice, Cod, Haddock, etc.
Diving for Scallops can be very dangerous, the divers are experienced and knowledgeable about where to find healthy stocks, this is partly the reason for their fairly high price, but diving for them is much friendlier to the environment than using a large trawler as the divers select only the large Scallops and leave alone the smaller ones in order to grow and maintain a healthy stock, plus the divers cause very little damage to the environment, as apposed to a trawler churning up the seabed!
Scallops have been known to live up to 20 years! but usually the xxl Scallops we use in the restaurant live to around 10-12 years, which is still amazing! As a Scallop grows, you can count the rings on its shell in order to tell its age (similar to that of a tree trunk!), in a good year, when there is plenty of food about, the Scallops will grow faster and larger.
As a general rule (well, my general rule) when it comes to cooking them, the less you do to a Scallop the better, there is nothing worse than eating a Scallop in a restaurant that has been played around with, rolled in this and that, served with a foam, espuma or jelly, aaarrrhhhhh! Just let them serve themselves, I simply open them by putting them on a chopping board, flat side down and sliding a sharp knife between the gap in the shell, angling the knife slightly downwards so as not to cut into the Scallop meat, then remove the skirt and the coral (I usually leave the coral on if it is not spawning, between the months of may and September, it can be beautifully sweet, yet if it is spawning, large, mushy and not very nice to eat! So in this case it can be removed), I leave the white muscle attached to the shell, this almost acts like a natural bowl! Then simple grill them, over the highest heat achievable, hot and fast is the secret here, then I serve them with something really simple, just a few ingredients, here are a few ideas:
-Garlic, parsley, olive oil and grated lemon rind and juice.
-Thai fish sauce, finely sliced Birdseye chillies and freshly squeezed lime juice.
-A simple Beurre noisette ( butter, browned in a pan until it is almost burned)!
They are also great served raw! Simple sliced thinly, layed on a plate and dressed with soy sauce or Yuzu juice, a Japanese citrus fruit kind of a cross between a lemon and a grapefruit, or just olive oil, lemon juice and salt and pepper.
More interesting ''Scallop'' facts!
-The roe on a scallop can contain up to 100 million eggs when it is spawning! And will change size throughout the year!
-Scallops are Hermaphrodites! The ''orange segment'', known as the roe contains the Scallops eggs, and its creamy coloured tip contains its sperm!
-Unlike Oysters and Muscles, Scallops don't need to anchor themselves onto rocks, piers or coral, they prefer to move about and can be speedy little thing! Once parked on the seabed they will lie flat side down, covering themselves in a thin layer of sand for camouflage and move around the seabed several times a day!
So, that's Scallops, now I am off to buy a few for my lunch!
Posted by Chris Golding at 01:38