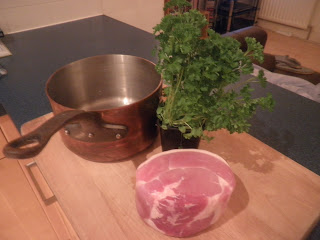 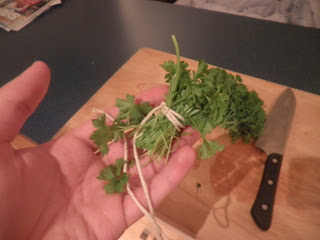 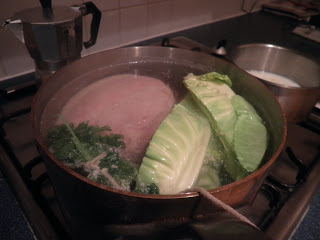 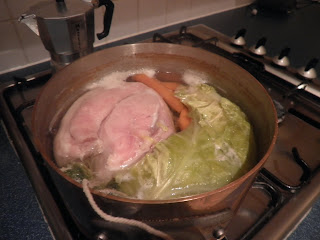 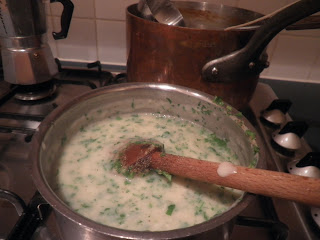 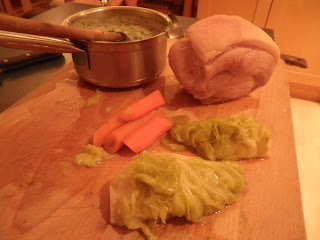 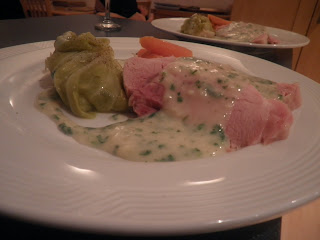 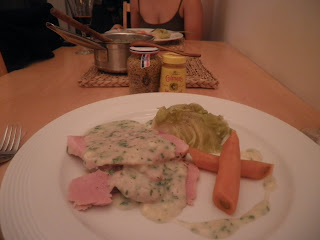 What can be more comforting on a cold Decembers evening than Boiled Ham and Parsley sauce? Nothing in my view.

Ingredients (for 2),
1 Gammon joint weighing between 600 and 800 grams,
2 carrots, peeled an halved,
1 hispi or savoy cabbage, outer leaves removed, cut in half length ways,
a few cloves,
a few black peppercorns,
a bunch of curly parsley stalks,
water to cover,

Soak the gammon in cold water for a few hours, then add to a suitable sized pan with the vegetables, spices and parsley stalks and cover with water.
Put the pot on a low heat and simmer for an hour or so, skimming regularly.
Meanwhile make the parsley sauce by heating the milk and diced shallot just below boiling point, then remove from the heat and allow to 'infuse' for 10/15 minutes. Next melt the butter and flour in a small pot to form a roux and slowly add the milk and cooking liquor from the gammon, chop the curly parsley and add it to the sauce, season with salt (if needed, remember that the liquor can be salty) and white pepper.
Remove the Gammon and vegetables from the liquid and drain them on kitchen paper, slice the gammon, arrange on 2 plates with the cabbage and carrots, sauce and serve.
Posted by Chris Golding at 12:04