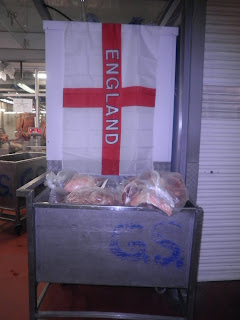 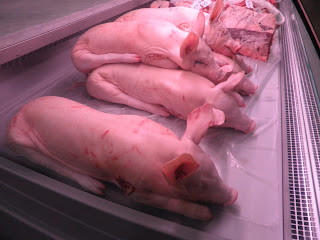 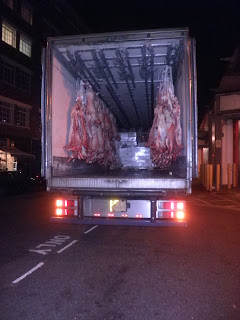 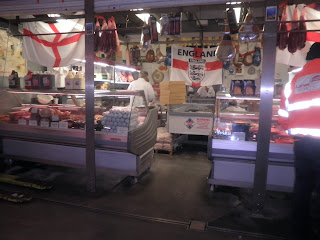 London has so many great food markets, yet unlike most other markets in the cities of Europe, London's main food markets are open during the hours that most of us sleep! So most of us rarely get to see what they have on offer, forget the expensive, yet trendy, farmers markets (although these are great!), I am talking about the real, hustle and bustle markets, where a real bargain can be found, and the traders really are passionate and knowledgeable about what they sell such as New Covent Garden vegetable market, Billingsgate fish market or Smithfield meat market, which I recently visited.

Originally known as ''Smoothfield'', there has been a livestock market on this site for more than 800 years! As early as the 12th Century it was used as a vast recreational area where jousts and tournaments (and no doubt, the occasional cock fight!) took place. By the middle ages the area had become the most famous livestock market in Europe.
There is also a darker side to the market, as from the early 13th century, it was used to execute criminals! Some 200 people have been executed there,mainly for their religious beliefs, most of them burned to death! Those executed include Wat Tyler, the leader of the Peasants revolt and more famously Scottish hero William Wallace, in 1305.
It was also the location of the Bartholomew Fair, 3 days, which over the years became the most debouched and drunken event in the holiday calender, even so it lasted over 700 years, until it was closed in 1855.

So theres a bit of history, now to my visit. Well Smithfield opens its doors to the general public at 3.....am, so you have to be a bit loopy to visit a market at 3 in the morning to save a few £s on some chicken legs! or be a chef, therefore you are used to never sleeping anyhow! Well, I had just worked two 16 hour shifts , back to back, but I wanted some meat for my World cup party, so we finished at 12.30 and therefore had 2 and a half hours to kill, so me and a few of my fellow chefs from Zuma marched off down to China town in the early hours to kill a bit of time.
then jumped on the bus and arrived there at 3, the market was already buzzing, full of stereotypical butcher like blokes, think fat, bald, cockney characters wearing butchers aprons, laughing and joking with one another, they all had time for me and answered all questions that I had to ask them, throwing the odd jokes in, here and there.
We spent a few hours browsing around the market, which is full of bargains, some of the best on offer were 50 chicken legs for £20, and a whole four rib of beef for £30! Bargains Gallore!
I picked up 2 Farmed Rabbits, 2 Veals kidneys and 2 kg of English diced chuck beef, all for about £32!
So I will definitely be visiting as often as I have the energy to and soon I Will do a post on New Covent Garden vegetable market and Billingsgate fish market.
Posted by Chris Golding at 12:46